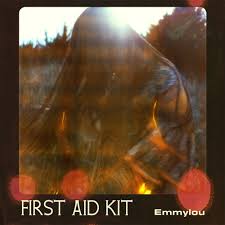 It took me a while to choose a song for my musical growth plan. I wanted a song that was challenging (voice cracks on the high notes) yet achievable (no Florence Welch or Whitney Houston). In 2010 a friend of mine played a Youtube video of Swedish sisters Klara and Johanna Soderberg covering folk band The Fleet Foxes’ Tiger Mountain Peasant Song while sitting in the forest with a guitar, their voices in perfect harmony. Soon after this video was posted on YouTube the sisters (then teenagers) formed the band First Aid Kit and I have been a fan of their music ever since. They have released four albums since then with so many good tunes but Emmylou is still my favorite and the song I chose to perfect over the next couple of months.

My midterm goal was to sing the whole chorus in tune with First Aid Kit.

I was given the opportunity to have one on one voice instruction with Ines our Music in the Elementary Classroom Professor. The chorus starts off on a high note and I found it a challenge to to get my voice there on the first note so Ines gave me some visuals to help me “place my voice” and use my “head voice” (singing voice) instead of my “chest voice” (speaking voice).

In order to have enough air in your lungs to push the notes out, put your mouth into the same shape that you would if you were drinking out of a straw. This makes your breath go into your stomach rather than your chest allowing for deeper breaths. You will know you are breathing into your stomach when you can see/feel your belly rising with each breath. If your shoulders are rising it means you are breathing into your chest and not your stomach and your breath will be too shallow.

Originally I had planned on allocating half an hour to my singing practice every day. I found it was difficult to find time each day to practice singing, especially half an hour! I don’t have my car on the road anymore (a place I did most of my singing) so I decided that I would practice every day while I did the dishes, playing the song 3 times, practising just the chorus, a much more manageable time limit.

For some reason I thought that when I took a breath in between lyrics it had to be silent so that the future microphone would not pick up the loud inhale of breath which means that I was not getting enough oxygen to sing. During my second lesson Ines told me not to worry at all about being loud when breathing in. As soon as I focused more on getting enough air in my lungs instead of the sound my singing vastly improved, not only was I able to get enough oxygen I was able to hit the notes and sing the chorus in tune!

My goal for the end of semester is to be able to sing the verse (everything that is not the chorus) in tune. There are some higher, longer notes than the chorus but practice makes perfect.

My musical inquiry for this term is to improve my singing voice. I have always loved to sing, a habit I picked up from my Mom and a sure fire way to know that I am in a good mood. As a kid I would put on The Bodyguard soundtrack, sit really close to the speaker and belt it out, that way I couldn’t hear myself, just Whitney and it felt like it was me singing….”And IIIIIIIIII will always love you”.

I never considered myself a good singer, my siblings would get easily annoyed with the out of key sounds that would suddenly puncture the silence, the dinner table was the only place where singing was outlawed, every where else my voice was given free range. Just last year my sister told me that I actually have a pretty good voice and that she always told me I wasn’t good to discourage me from singing all the time. For almost 30 years I thought that not only could I not sing but that I would never be able to.

One Christmas my Mom gave me a coaster with a Zimbabwe proverb on it and it changed my perspective on singing and dancing.

I think too many people see singing and dancing as something you can do only if your “good” at it, this idea limits self expression and growth. The proverb doesn’t say anything about singing or dancing well because that is not the point, to me it means that with patience and practice you can do anything…..even sing.